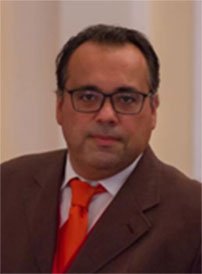 Prof. Massimo Villari is Full Professor in Computer Science at University of Messina (Italy).
He is actively working as IT Security and Distributed Systems Analyst in Cloud Computing, virtualization and Storage and one of the creators of Osmotic Computing Paradigm.

For the EU Projects “RESERVOIR” he leaded the IT security activities of the whole project.
For the EU Project “VISION-CLOUD”and H2020-BEACON, he covered the role of architectural designer for UniME. He was Scientific ICT Responsible in the EU Project frontierCities, the Accelerator of FIWARE on Smart Cities – Smart Mobility. He is strongly involved in EU Future Internet initiatives, specifically Cloud Computing and Security in Distributed Systems. He is co-author of more of 190 scientific publications and patents in Cloud Computing (Cloud Federation), Distributed Systems, Wireless Network, Network Security, Cloud Security and Cloud and IoTs, and recently in Osmotic Computing.

Since 2011 he is a Fellow of IARIA, recognized as a Cloud Computing Expert, and since 2011 he is also involved in the activities of the FIArch, the EU Working Group on Future Internet Architecture. In 2014 was recognized by an independent assessment (IEEE Cloud Computing Transaction, Issue April 2014) as one of World-Wide active scientific researchers, top 27 classification, in Cloud Computing Area. He is General Chair of IEEE-ICFEC 2019 and Workshop Co-Chair in IEEE-CIC 2018. He will be General Chair of IEEE CCGRID in 2021 in Messina(Sicily).

Currently he is the Head of Computer Science School and Rector delegate on ICT for whole University of Messina. He also covers the role of academic consultant for the City Council of Messina in the context of Smart City.